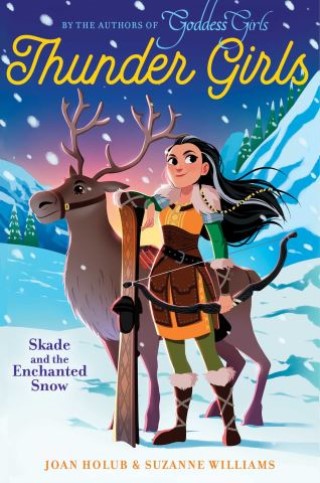 Skade and the Enchanted Snow

From the authors of the Goddess Girls series comes the fourth book in a series steeped in Norse mythology, magic, adventure, and friendship.

Skade, the goddess of skiing, is known as one of the best athletes—and a top student—at Asgard Academy. But lately, she’s felt like she’s been in a slump.

When three giants appear and offer to mend the rift between the worlds by organizing a ski competition, Skade feels like this is her big chance to prove herself again. After all, the powerful Odin will be choosing the Asgard team based on ability, attitude, and academics! But much to Skade’s embarrassment, Odin is less than impressed with her—and names her as an alternate instead of part of the main team.

Aside from Skade’s frustrations, something seems fishy about the whole competition. After one of Skade’s classmates has a strange nightmare about it, they start to wonder if the games are one big cover-up for something more sinister. And when the Asgard team finds themselves on thin ice, it’s up to Skade to overcome a big fear, save her friend—and show everyone what she’s made of!

Joan Holub: Joan Holub has authored and/or illustrated over 140 children’s books, including the Goddess Girls series, the Heroes in Training series, the New York Times bestselling picture book Mighty Dads (illustrated by James Dean), and Little Red Writing (illustrated by Melissa Sweet). She lives in North Carolina and is online at JoanHolub.com.Suzanne Williams is a former elementary school librarian and the author of over seventy books for children, including the award-winning picture books Library Lil (illustrated by Steven Kellogg) and My Dog Never Says Please (illustrated by Tedd Arnold), and several chapter book and middle grade series. She also coauthors the Goddess Girls and Thunder Girls series with the fantastic Joan Holub. Visit her at Suzanne-Williams.com.