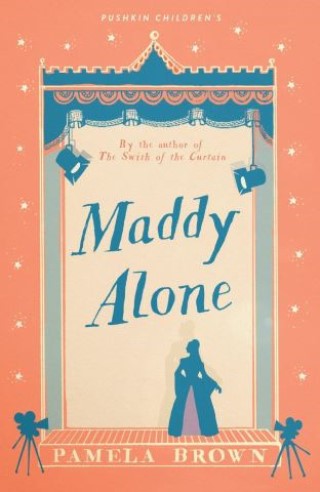 The second book in the Blue Door series, following on from The Swish of the Curtain, the classic story which inspired actors from Maggie Smith to Eileen Atkins

With the rest of the Blue Door Theatre Company in London training to be actors, poor Maddy has been left all alone in the little town of Fenchester. She longs to follow the others to the big city, but she is 12 years old, and she has maths homework to do.

However, Maddy has never let a bit of schoolwork come between her and her dreams. When she finds that a famous Dutch film director is in town, she leaps at the opportunity: she will be a film star. But stardom isn't an easy life (in spite of the personal dressing room and the lovely costumes) and there are setbacks and difficulties along the way. But with such a stubborn and talented leading lady as Maddy, surely even Mrs Potter-Smith and the headmistress can't stop the show from going on?

Maddy Alone is the second book in the Blue Door series, following on from the classic of children's literature The Swish of the Curtain.

Pamela Brown: Pamela Brown (1924-1989) was a British writer, actor and television producer. She was just 14 when she started writing her first book, and the town of Fenchester in the books is inspired by her home town of Colchester. During the Second World War, she went to live in Wales, so The Swish of the Curtain was not published until 1941, when she was 16. She used the earnings from the books to train at RADA, and became an actor and a producer of children's television programmes.